You can use Utilso to decode, verify, and generate JWTs. Work completely offline. Stop using online website and paste sensitive data. JSON Web Token is a proposed Internet standard for creating data with optional signature and/or optional encryption whose payload holds JSON that asserts some number of claims. The tokens are signed either using a private secret or a public/private key. 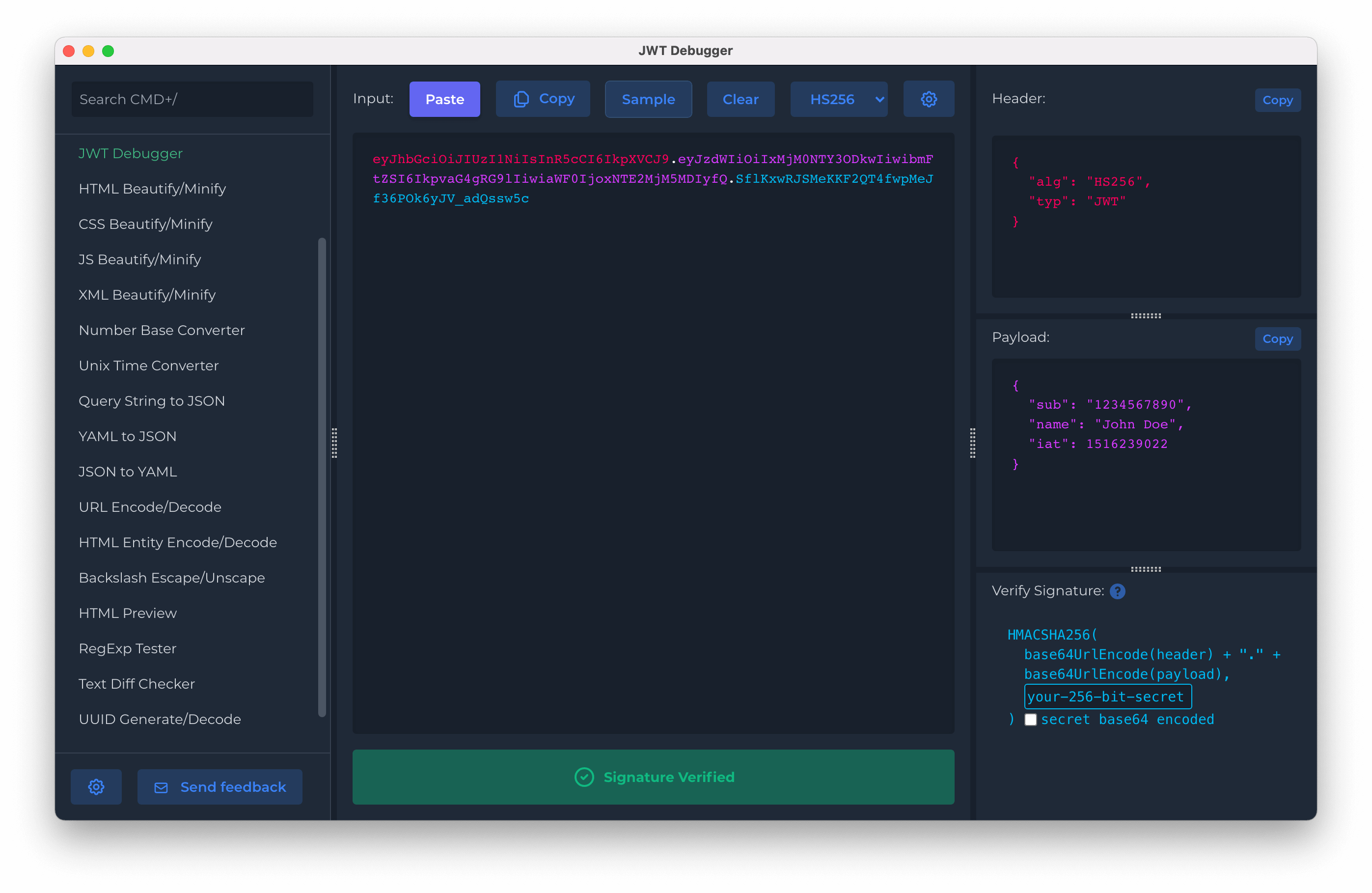 What is JSON Web Token?

JSON Web Token (JWT) is an open standard (RFC 7519) that defines a compact and self-contained way for securely transmitting information between parties as a JSON object. This information can be verified and trusted because it is digitally signed. JWTs can be signed using a secret (with the HMAC algorithm) or a public/private key pair using RSA or ECDSA. Although JWTs can be encrypted to also provide secrecy between parties, we will focus on signed tokens. Signed tokens can verify the integrity of the claims contained within it, while encrypted tokens hide those claims from other parties. When tokens are signed using public/private key pairs, the signature also certifies that only the party holding the private key is the one that signed it.

When should you use JSON Web Tokens?

Here are some scenarios where JSON Web Tokens are useful:

What is the JSON Web Token structure?

In its compact form, JSON Web Tokens consist of three parts separated by dots (.), which are: Therefore, a JWT typically looks like the following. xxxxx.yyyyy.zzzzz Let's break down the different parts.

The header typically consists of two parts: the type of the token, which is JWT, and the signing algorithm being used, such as HMAC SHA256 or RSA. For example:

Then, this JSON is Base64Url encoded to form the first part of the JWT.

The second part of the token is the payload, which contains the claims. Claims are statements about an entity (typically, the user) and additional data. There are three types of claims: registered, public, and private claims. An example payload could be:

The payload is then Base64Url encoded to form the second part of the JSON Web Token.

Do note that for signed tokens this information, though protected against tampering, is readable by anyone. Do not put secret information in the payload or header elements of a JWT unless it is encrypted.

To create the signature part you have to take the encoded header, the encoded payload, a secret, the algorithm specified in the header, and sign that. For example if you want to use the HMAC SHA256 algorithm, the signature will be created in the following way:

The signature is used to verify the message wasn't changed along the way, and, in the case of tokens signed with a private key, it can also verify that the sender of the JWT is who it says it is.

The output is three Base64-URL strings separated by dots that can be easily passed in HTML and HTTP environments, while being more compact when compared to XML-based standards such as SAML. The following shows a JWT that has the previous header and payload encoded, and it is signed with a secret.